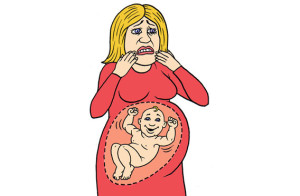 Taking antidepressants during pregnancy bears both risks and benefits. According to a US study published in the “American Journal of Psychiatry”, it lowers the risk of certain pregnancy complications. At the same time, however, the likelihood of neonatal problems is higher.

Together with Finnish colleagues, scientists from Columbia University in New York analysed data of 845,345 single births in Finland between 1996 and 2010. In addition to medications taken by the mothers, they also evaluated the mothers’ psychiatric and medical history and hospital reports.

The women were divided into three groups: women who had taken selective serotonin reuptake inhibitors (SSRIs), those who had been diagnosed with depression but took no medication and those without a diagnosis of depression or antidepressant purchases. 12,817 women had taken antidepressants prior to pregnancy or in the first trimester, and 59 per cent of them had taken at least two packs.

The study showed that the use of antidepressants reduced the risk of some pregnancy complications. When comparing depressive women using antidepressants to depressive women not using medications, the likelihood of preterm birth was 16 per cent lower; that of very early preterm birth was almost 50 per cent lower. Women with depression who did not take any medication had a higher risk of Caesarean section (26.5 per cent) compared to healthy women or women diagnosed with depression using medication (each 17 per cent). Women with depression also had a slightly higher risk of bleeding during or after delivery (3.5 per cent) than the control group and those using medication (each three per cent).

However, taking antidepressants increased the risk of neonatal complications. SSRI usage was associated with all neonatal problems – such as breathing issues – and therefore led to longer hospital stays for the babies. “Given these divergent findings, the decision whether to prescribe these medications during pregnancy should be individualised to the mother’s medical and psychiatric history,” emphasised senior author Alan Brown.