No one knew how to help him during a panic attack, so this autistic man made an app to tell them.

Have you ever felt totally overwhelmed by everything around you and just needed the world to stop for a moment?

But for many people who fall on the spectrum of autism, these kinds of experiences can be all too common.

Autism spectrum disorder (ASD) refers to a range of neuro-atypical conditions typically characterized by impairments or difficulties in social, developmental, and occupational behaviors.

Autistic people often have to work extra hard to interpret social cues and communicate with others, which, well, can be really frustrating.

Think of your own worst memory of the stress caused by miscommunication. Then imagine pretty much every single social interaction you have being just like that — totally outside your internal comfort zone.

You can see how easy it can be for an autistic person to be overcome by the sensory overload surrounding them every day from normal human interaction and communication alone.

People have different ways of responding to stress, such as panic attacks, a loss of speech, or an ability to move. For autistic people whose behavioral patterns are already considered atypical, these signs might be even harder to identify.

While it’s nice when people try to help in those moments, sometimes their questions make things worse.

Especially when you can’t give them the answers they need to help you.

Sometimes, when you’re stressed out, the absolute last thing you need is for someone to ask you how they can help. It’s a nice gesture, of course, but when you’ve reached a certain point in your panic attack, you probably don’t have the brainpower left to articulate your needs.

It’s not that Autistic people are trying to be difficult. It’s not that they’re being stubborn or prideful or refusing help. When your body is too overwhelmed with stress and adrenaline, sometimes you just cannot fulfill the functions someone is asking of you.

Even if you really, really want to.

That’s why Jeroen De Busser created the “Emergency Chat” app — for those times when verbal communication is just not an option.

Jeroen is an autistic computer science student. He shared with me by email his memory of a particularly harrowing meltdown in which he went completely nonverbal.

The situation was further exacerbated by the presence of his friends, who despite their best intentions, did not know how best to help him — and of course, he was unable to tell them himself, which made everything even more frustrating.

This experience inspired Jeroen to create Emergency Chat, a text-based app that displays personalized instructions on how to assist or handle an individual during a meltdown or panic attack, instead of wasting precious time in trying to parse through verbal communication. The app is currently available for Android phones, but we’re told that an iOS version is in the orks. Here’s what Emergency Chat looks like: 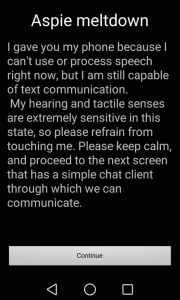 All you need to do is hand your phone to someone and the app will tell them how to best help.

“It has a base text that explains to the person you gave your phone to that you can’t use speech and want to use this app to communicate.

Both the title and text can be adjusted in the settings to be whatever you want the person you give your phone to to know.”

The app then provides a bare-bones chat interface, that lets you communicate with the people trying to help: 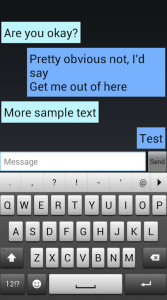 Although the default screen is set for autistic people, it can be customized for any number of physical, mental, or emotional needs.

While most of the Emergency Chat’s 500+ users have relied on its default functionality for autism, one savvy user has customized the app to help with their tracheostomy, in case there is ever a problem: 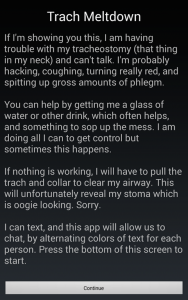 The best way to help one another is to listen, and things like Emergency Chat improve communication for everyone.

I know that deep within our hearts of hearts we’re all good people, and we genuinely want to help each other. But I also know that even when we mean well, we need to be sure that we’re helping people on their own terms, the way they want and need to be helped.

This is particularly true when it comes to autistic people. Just because they function differently from the majority of people doesn’t mean they don’t function at all.

What an app like Emergency Chat does is give autistic people, or people with PTSD, or people with tracheostomies, and so on, control over the way the world around them tries to help them function when they lose their ability to speak. It saves them the stress and anxiety of wondering what will happen to them, whether they’re with friends or in a strange environment, and it ensures that they can ask for — and receive — the help they need.

In short — it’s a win for everyone involved.