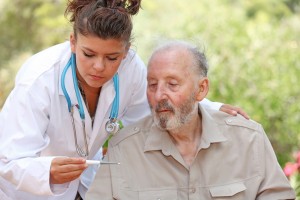 Depression is one of the most common reasons for GP consultations, and its associated personal and economic burden is considerable. While antidepressants remain an important treatment option, many patients and healthcare professionals would like to access psychological therapy as an alternative or adjunct to drug treatment

Study question How effective is supported computerised cognitive behaviour therapy (cCBT) as an adjunct to usual primary care for adults with depression?

Methods This was a pragmatic, multicentre, three arm, parallel randomised controlled trial with simple randomisation. Treatment allocation was not blinded. Participants were adults with symptoms of depression (score ≥10 on nine item patient health questionnaire, PHQ-9) who were randomised to receive a commercially produced cCBT programme (“Beating the Blues”) or a free to use cCBT programme (MoodGYM) in addition to usual GP care. Participants were supported and encouraged to complete the programme via weekly telephone calls. Control participants were offered usual GP care, with no constraints on the range of treatments that could be accessed. The primary outcome was severity of depression assessed with the PHQ-9 at four months. Secondary outcomes included health related quality of life (measured by SF-36) and psychological wellbeing (measured by CORE-OM) at four, 12, and 24 months and depression at 12 and 24 months.

Study answer and limitations Participants offered commercial or free to use cCBT experienced no additional improvement in depression compared with usual GP care at four months (odds ratio 1.19 (95% confidence interval 0.75 to 1.88) for Beating the Blues v usual GP care; 0.98 (0.62 to 1.56) for MoodGYM v usual GP care). There was no evidence of an overall difference between either programme compared with usual GP care (0.99 (0.57 to 1.70) and 0.68 (0.42 to 1.10), respectively) at any time point. Commercially provided cCBT conferred no additional benefit over free to use cCBT or usual GP care at any follow-up point. Uptake and use of cCBT was low, despite regular telephone support. Nearly a quarter of participants (24%) had dropped out by four months. The study did not have enough power to detect small differences so these cannot be ruled out. Findings cannot be generalised to cCBT offered with a much higher level of guidance and support.

Computerised CBT forms a core component of psychological therapy services in primary care in the UK and other health systems. The overall conclusion is that supported computerised cognitive behaviour therapy confers modest or no benefit over usual GP care and suggests that the routine promotion and commissioning of cCBT be reconsidered in light of our findings. Commercially developed computerised cognitive behaviour therapy products confer little or no benefit over free to use products. This is an important finding for those who commission services and purchase commercial products on behalf of publicly funded health services. The routine use and purchase of computerised therapy is likely to be an ineffective form of low intensity treatment for depression and an inefficient use of finite healthcare resources. There is a range of treatments for depression that might be considered instead of cCBT. These include telephone guided self help, bibliotherapy, low intensity psychological workers supporting self help technologies, and therapist delivered cognitive behaviour therapy. There is a need to evaluate the clinical and cost effectiveness of such approaches. In relation to cCBT there is, for example, an ongoing independent trial (REEACT 2) of the effectiveness of guided computer therapy versus the effectiveness of guided bibliotherapy for depression.