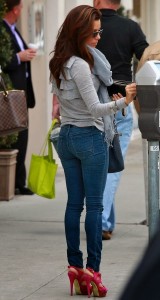 According to the article, this has been a one time event, but nevertheless an interesting or toxic set of conditions.

Fashion can pose a health hazard. Wearing very tight jeans for many hours had led to a woman in Australia losing all feeling in her legs and being unable to walk properly for several days. The case was published in the “Journal of Neurology, Neurosurgery & Psychiatry”.

According to the report, the 35 year-old had helped a family member move. This involved many hours of squatting while unpacking boxes. As the day went on, the jeans felt increasingly tight and uncomfortable. Later that evening, she suddenly developed a numb feeling in her feet and was unable to walk correctly and fell. She was only found several hours later and her legs were so swollen that she had to be cut out of the trousers.

The 35 year-old could no longer move her ankles and toes and felt numb in her feet and lower part of her legs. She was treated with intravenous hydration and was able to walk normally again only after four days, said the doctors at the Royal Adelaide Hospital.

The tight jeans had cut off the blood supply to the leg muscles and the nerves were damaged due to the continuous pressure. Thus, wearing skinny jeans caused a “neurological complication” concluded the physicians.