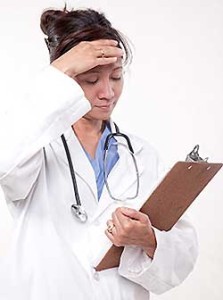 A new survey revealed that a large number of physicians are willing to continue seeing patients despite severe symptoms that may indicate contagious disease, such as fever, diarrhea, vomiting, and influenza-like illness.

Researchers at the University of California Irvine presented the results from their anonymous, structured electronic survey at the annual meeting of the Infectious Diseases Society of America, IDWeek, held in October in San Diego.

Survey respondents cited guilt and not believing they would be very contagious as reasons they would continue working, but 70% of survey respondents indicated that seeing colleagues sent home if they work while ill and seeing a lack of negative repercussions for physicians who stay home would make them more likely to stay home themselves.
Source:  IDWeek 2015 Abstract #328. Do No Harm: Attitudes Among Physicians and Trainees About Working While Ill