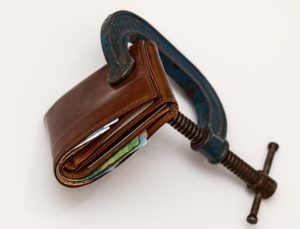 Most couples are delighted when they come into a windfall of cash, or decide it’s time for a spending splurge — right up until they start arguing about what to buy.

A 2014 MONEY poll found that finances are the biggest subject of romantic fights, which is perhaps unnecessary. Sixty-four years earlier, the famed mathematician John Nash proposed an elegant solution to any argument over money. Nash, the subject of A Beautiful Mind, wrote an 8-page paper in 1950 titled “The Bargaining Problem” that offered a basic equation for how two people can divide anything that’s quantifiable — money, space, pizza — to maximum joint benefit.

Nash’s formula is one of many noted by Wellesley College mathematics professor Oscar Fernandez in his recent book The Calculus of Happiness, which surveys a wide variety of ways that mathematics can be used to improve decision making and general well-being. The way it works is simple: Whenever two people are deciding how to divvy up a shared resource, they each just have to rate how happy they would be if they got all of it, on a scale of 1 to 10, as well as how happy they would be if they can’t reach an agreement and have to give up without either person getting anything.

In consultation with Fernandez, we created this interactive tool to resolve any financial dispute using Nash’s formula — by answering how you should split the money and whether you should make a deal at all. Hopefully, this can help settle an argument with a spouse, lover, friend or even foe:

How Much Money Do You Have to Split?

What do you most want to spend it on?

How happy would you be if yougot all the money?

If you can’t agree and no one gets anything, how happy would yoube with no deal?

What does your partner most want to spend it on?

How happy would your partner be if they got all the money?

If you can’t agree and no one gets anything, how happy would your partner be with no deal?

Here’s how the math works: The output of Nash’s formula is the amount of money (or pizza) each person gets, adding up to the total. To measure the quality of the bargain, it takes the percentage of the total that each person got and multiplies it by the degree of happiness they would have experienced if they got all of it. So if a person rates their ideal satisfaction (the first slider above) as an 8 on the 1-to-10 scale, and gets 75% of the money, their happiness is considered to be 6. It then subtracts the baseline happiness they would feel if negotiations were to fall apart — the second slider — to measure how much more satisfied they are with the agreement than they would be if there was none. Last, it takes this figure for both parties and multiplies them together, a value called the “Nash Product.” The magic of Nash’s equation is that it can determine, with simple algebra, the split that would produce the highest value for this product.

As you might have noticed, the Nash product is not designed to solve every possible scenario. If two people both really want something, but would still be fairly happy if they got nothing, then there is no solution that produces a net gain in happiness for both parties (the “No Deal” scenario in the interactive). For example: If both people would experience a level of happiness of 9 with all of the money, but a level of 6 if no deal is reached, then even if they split the money, they’d each have a happiness of 4.5, which is less than if they got nothing.

This might seem puzzling, since one would think that an even divide is still better than no reward at all. The assumption is that, if both parties are so invested in the negotiation that they’d rather make no deal than get an unfair portion, no arrangement will satisfy either of them. In reality, most people would probably not be happy with a failed compromise, which makes the formula more likely to produce a valid deal.

Nash did not specifically design his formula for couples, but it applies equally well to romantic partners as it does to adversaries who need to divvy up, say, the proceeds of a joint bank heist. Whatever the circumstances, it finds the ideal balance that attends to both a person’s investment in getting their way and their willingness to walk away if they don’t. “The Nash Product counters and balances all of these forces,” Fernandez says.

In circumstances where, at first, no deal can produce a positive gain in happiness for both parties, the formula suggests that both people need to reevaluate how much they want something and how invested they are in working out a deal. The best way to correct a “No Deal” situation is for at least one party to choose an outcome that increases his or her level of happiness or reduces his or her willingness to abandon the bargain. In that respect, the formula has the therapeutic power to push both parties to reconsider what would make them happiest and how invested they are in coming to an agreement. Says Fernandez, “It’s the math trying to encourage you to change your behavior.”

Nash is best remembered for his contributions to game theory, a branch of mathematics that studies the ideal behavior of rational people in competitive circumstances. The field has wide applications in areas like economics and diplomacy, where the stakes can be high and a little math can go a long way toward counseling the best decisions. It comes up less often in the field of relationship science know as “marriage.” Fernandez would like to change that, because he believes that even a smidgeon of algebra can encapsulate a lot of wisdom. “It’s almost like the math is trying to tell you something,” he says.

Chris Wilson  Jul 24, 2017  Chris Wilson is the director of data journalism at TIME.com. He is the author of RaphaelJS: Graphics and Visualization on the Web.